Punjab Chased RCB & Won By 5 Wickets In The Third Match! 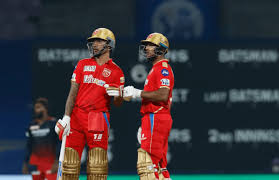 PBKS has shown an absurd comfort while chasing a massive score by RCB, and the credit goes to the all-around team performance while chasing 205. However, although PBKS has won the match with one over remaining – even after a splendid knock of 88 by du Plessis and a much-awaited run-scoring by Kohli; they cannot celebrate.

After losing the match, du Plessis – the RCB skipper, observed his teammates’ batting to be successful, but few catches were dropped – the match was lost. For example, he talks about Odean Smith, they have settled him on ten, and he has scored a storm-tossed 25 in mere eight balls. He also patted the opponent’s back for a splendid run chase that astonished him.

The chase will be inscribed in the golden template in the league’s history. None probably thought such a score was chaseable, but the way Mayank and Dhawan started middling the balls, the sweet sound reverberating around the stadium was saying – PBKS would not give up until the very end. The first couple of overs saw one boundary each. The singles also could have ended up with boundaries – but were halted by excellent fielding.

The fourth oversaw 14 runs arriving; Siraj was welcomed with a massive six and a boundary by Mayank. Willey also got hammered first by Mayank with a biggie, then by Dhawan by back-to-back boundaries. Powerful and elegant. After the fifth over, the score was 57 for no loss, and the target was not by then seemed unreachable. Keeping the run rate over ten runs per over, Mayank was gone on the first ball by Hasaranga.

Dhawan, who was on splendid touch, was also caught – a tough, low, and fast catch it was a cover. But, Rawat made no mistake. The run rate was not altered this time, Rajapaksa kept on swiveling around, and now Livingston was in the charge. They got 17 runs from two biggies and couples on the 13th over. However, the next over found Rajapaksa getting dismissed, and it was followed by Raja Bawa – facing a golden duck, Siraj got two precious wickets. Though Livingston was trying hard to keep the run rate at his position, he was out at the 15th over.

On the seventeenth over, RCB made the biggest mistake. They dropped Odean Smith’s catch, the ball was wet in dew, and it slipped in deep cover. After having the life again, Odean Smith used it totally on the 18th over. Starting with a six, he kept on hammering a boundary, followed by two more biggies. Finally, the muscular mercenary banged and rocked Siraj out of the fence, and it was a hard time for him. This over brought 26 runs, and PBKS then required only 11 out of two overs. The winning strokes came from Shahrukh Khan – with a six and a four, that made PBKS win by five wickets. The victory fell upon them with one over in hand.

Fantasy cricket players love and hate these twists and turns. Especially when a player of their team performs exceptionally well in the match. Cricket fantasy is a virtual sport that allows innumerable cricket-crazy fans to create their teams. You need to analyze and choose the best eleven players from the two teams before the match begins. Fantasy cricket team creation requires your attention to the performance of the players individually rather than that of the team as a whole. Some of the players from both, PBKS and RCB, are extremely popular in fantasy cricket.

Recommendations for the use of andriol in sports

How to Get an NBA Floor Cleaner Salary